Monument of the Living Artist who is protecting herself from the approaching tsunami with a swimming cap. The classical bust is not made to conserve the blooming beauty of the young artist forever, as it is filled with plant seeds, which through growing will subvert beauty from inside. 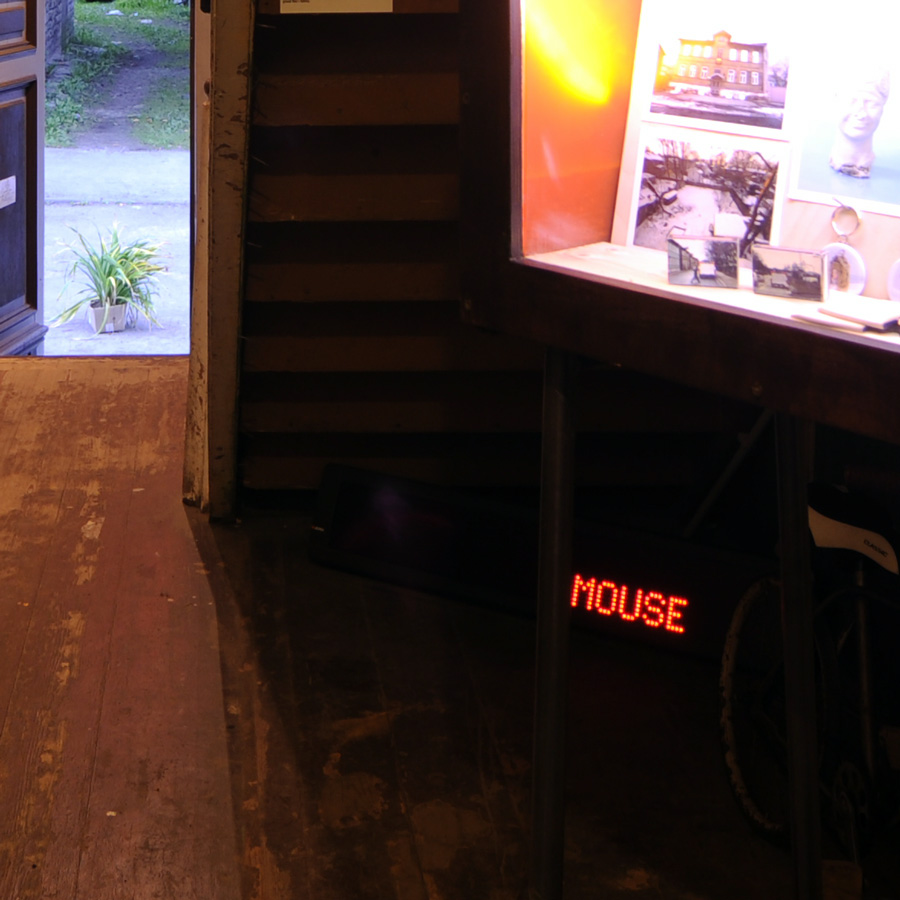 A real home provides comfort for all the big and small friends of the residents. In the Flo Kasearu House Museum a cute domesticated mouse can be seen scurrying around the ground floor’s hallway. 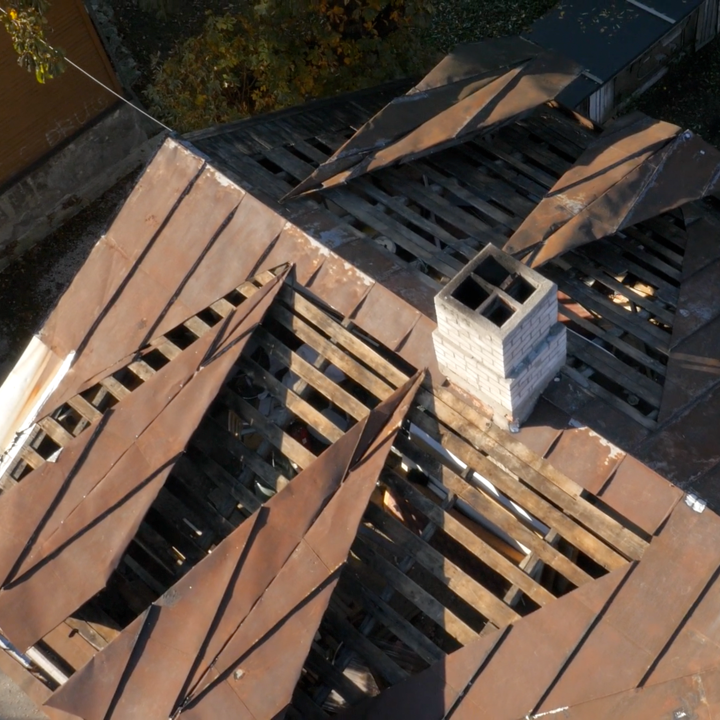 The group of works entitled “Uprising” are build around a video filmed during roof maintenance works performed on a building in Tallinn’s Pelgulinn district, where the artist lives and where she has been hosting her “Flo Kasearu House Museum” project since 2013. The metal taken off the roof was folded into plane figures, much like the DIY models folded by children from paper.

The DIY and reuse technology metal planes as the main motif of the exhibition appear to be symbolic of military action, yet simultaneously representative of an exit strategy, the crossing of the country’s borders by air, immigration and emigration issues. The airspace – a perspective from which to assess ones own position as both a liberating and a frightening idea.

Also responding to the current political milieu of strained international relationships between Russia and the West, Flo’s video and accompanying works – drawings and framed 3D models – reflect on the atmosphere prevailing under these circumstances in Estonia. The artist contemplates the heightened levels of paranoia in the media, calls for the increase in funding of the Department of Defence during elections, resumed faith in NATO membership, and so on. 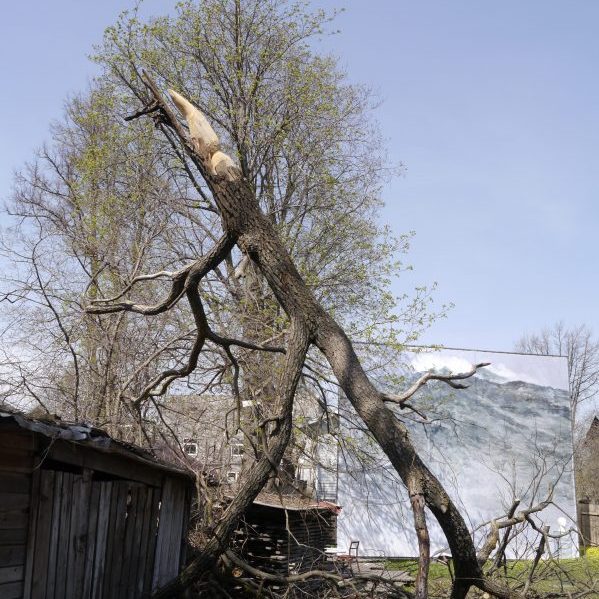 ‘Revelation’ marks the predetermination of the site for Flo Kasearu House Museum. In the autumn storm of 23 November 2012, a sizable branch shaped as a paintbrush fell into the courtyard of the museum-to-be. This was a clear sign that the museum of Flo Kasearu, who was educated as a painter, must be established exactly here. 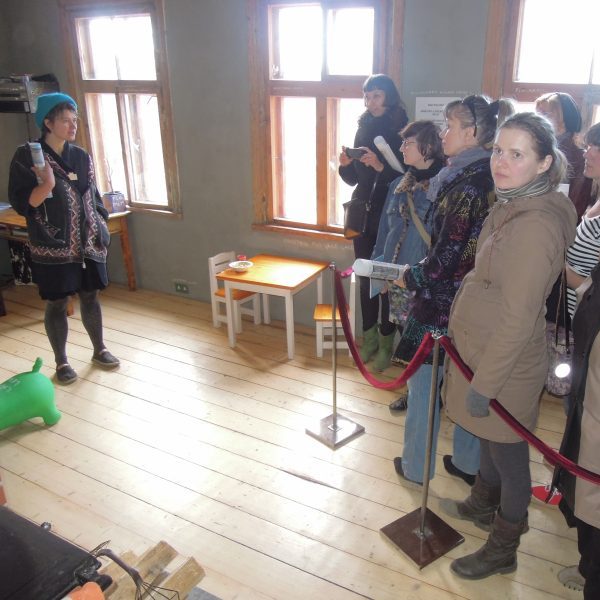 Flo Kasearu House Museum was established 24.04.2013 in the house where Flo Kasearu is currently living. Site-specific works address issues of property, gentrification, institutional hierarchy and the ability of an artist to mediate her own work within this framework. 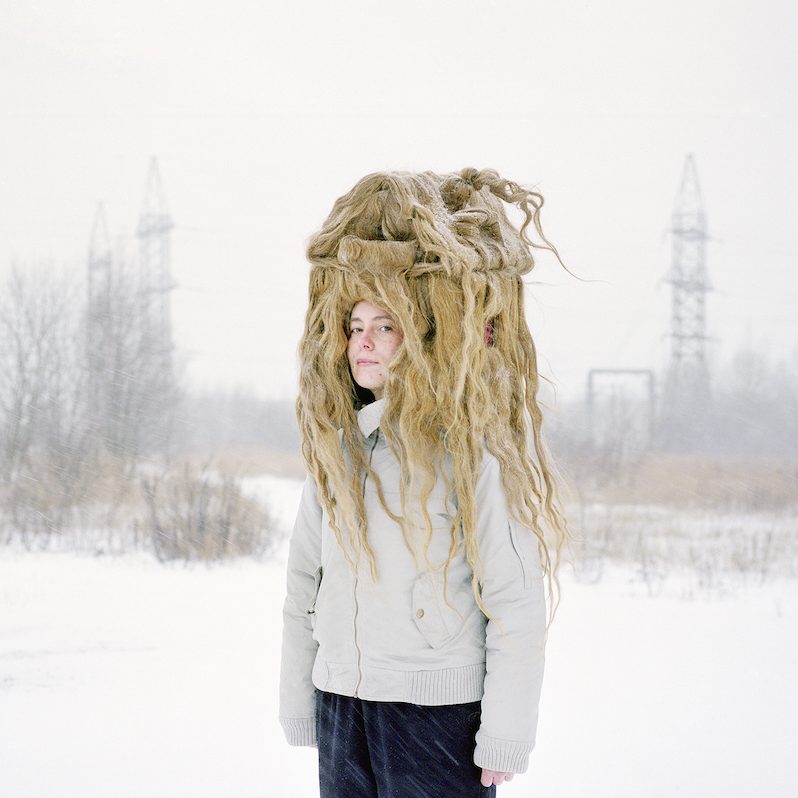 In a domestic setting, the visitor is encountered with a series of documentary images where people are posing with their house-shaped tousle. Models, who are in real life homeless, are carrying always their house with them. 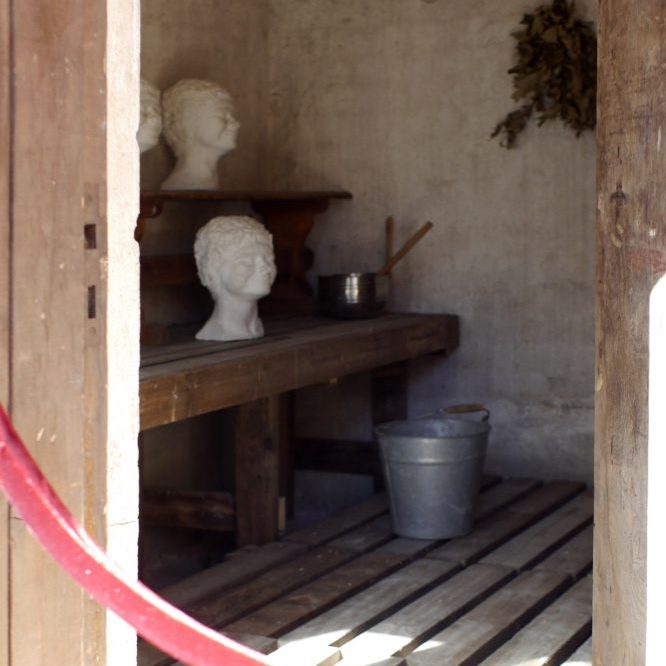 FKM offers from year 2014 opportunity to visit museum’s sauna with the artist to talk about (art) world problems.

The multifunctional library of the museum is on the second floor. Here a visitor can find an outstanding collection of catalogues and books deposited from the artist’s office. The library is compiled with regards to academic art researchers as well as people who are relatively new to the discourse. 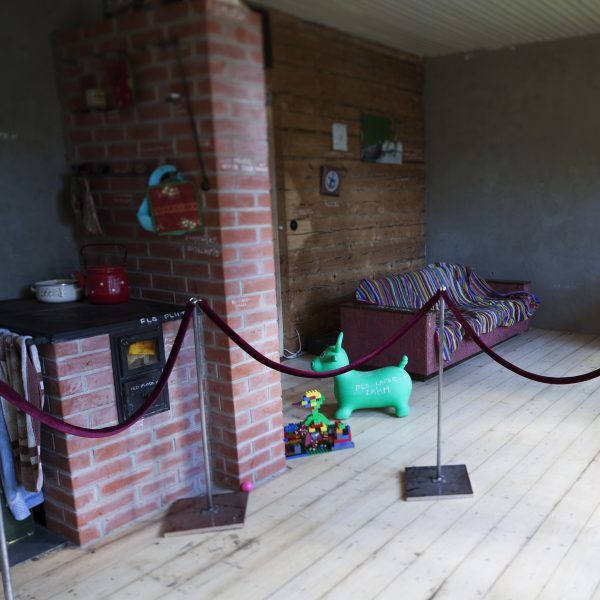 The collection of artefacts of the museum is mainly gathered into the living room and study of the artist. Here the visitor can see quotidian domestic objects as well as the desk of the artist, where her works are matured and finalized. We can see images of inspiring pieces of art from all over the world, also the day-to-day habitat of the artist and main activities of her young son. The culmination of the visit is the encounter with the artist Flo Kasearu herself. 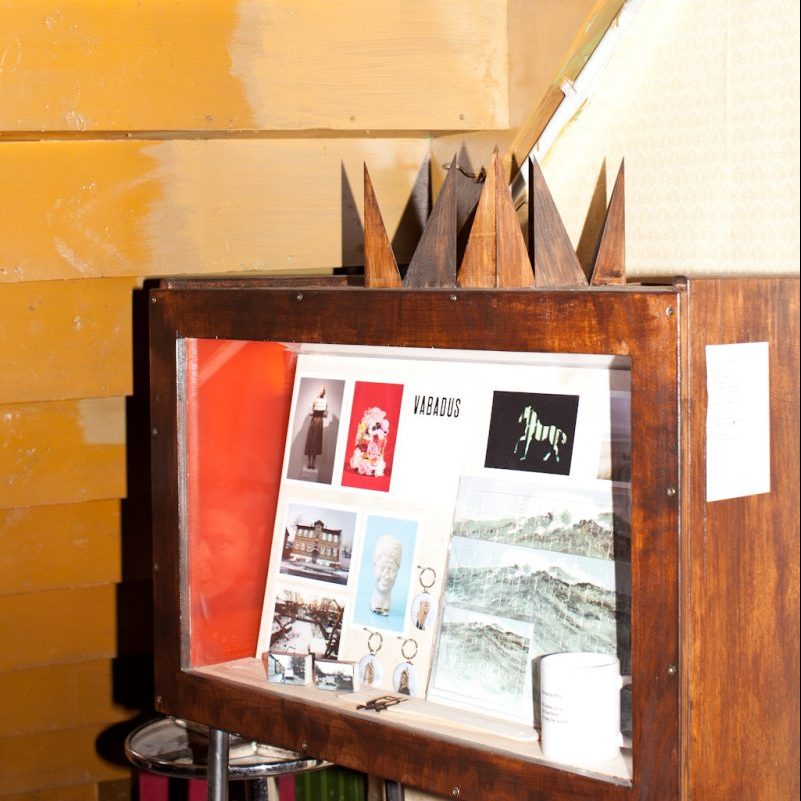 The museum gift shop offers the visitor a selection of souvenirs to remember the rich experience of the visit in the future. Puzzles, videos, kitchen- and household goods are both beautiful and practical. All items are based on the artist’s creative legacy and are one way to bring along the creative and intellectual game element of the museum to a visitor’s own home. 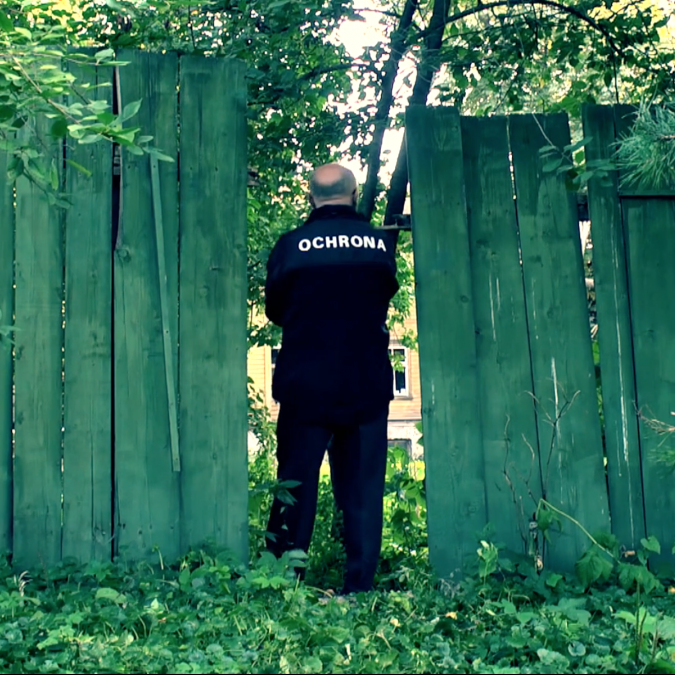 (de)Fence is a videodocumentation of exchange project where security guard from Zacheta National Gallery, Poland was guarding a hole in the fence of FKM garden. 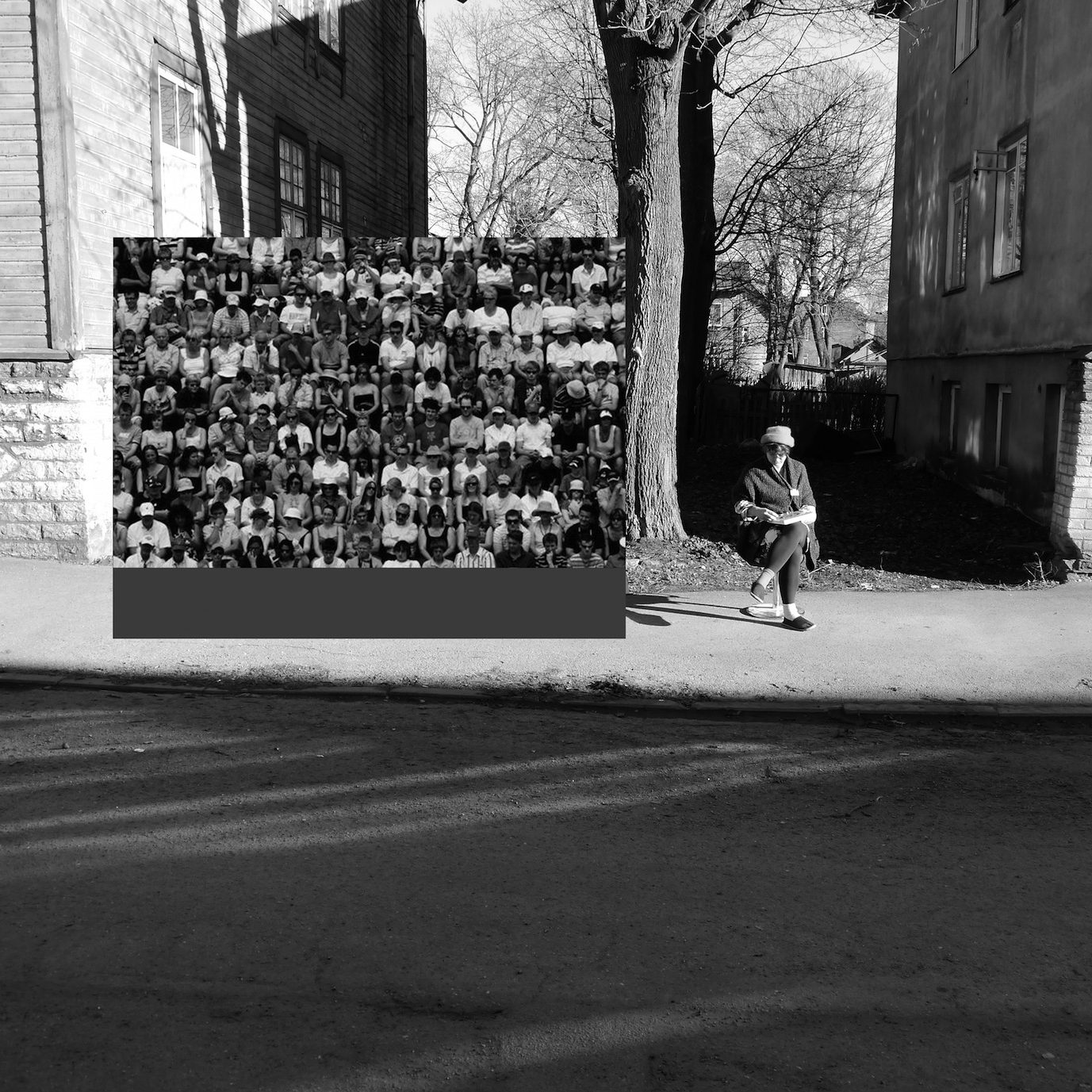 performance-installation
in collaboration with Riina Maidre

Now that the time of open windows has once again begun — would people be so kind as to not let their car engines whirr for half an hour under other people’s opened windows.

– And the national anthem coming from the tower every morning – couldn’t that be turned down a bit?
– Couldn’t the toll of a church bell be somehow forbidden?

“House Music” is a site-specific installation/summer performance in city quarter of Tallinn called Pelgulinn, in front of the house at Pebre 8. There is no gallery or theater space, instead there are live and everyday rhythms of one street in Tallinn. Whatever takes place here is the contemporary culture that writes itself and does so in the street, in social media and in the interpretations of the public. “House Music” brings people to the street and makes them move around in time, mediates the feeling of home, sells community identity and buys contentment.

The residents of Pelgulinn and the area itself are to set off and frame the performance. 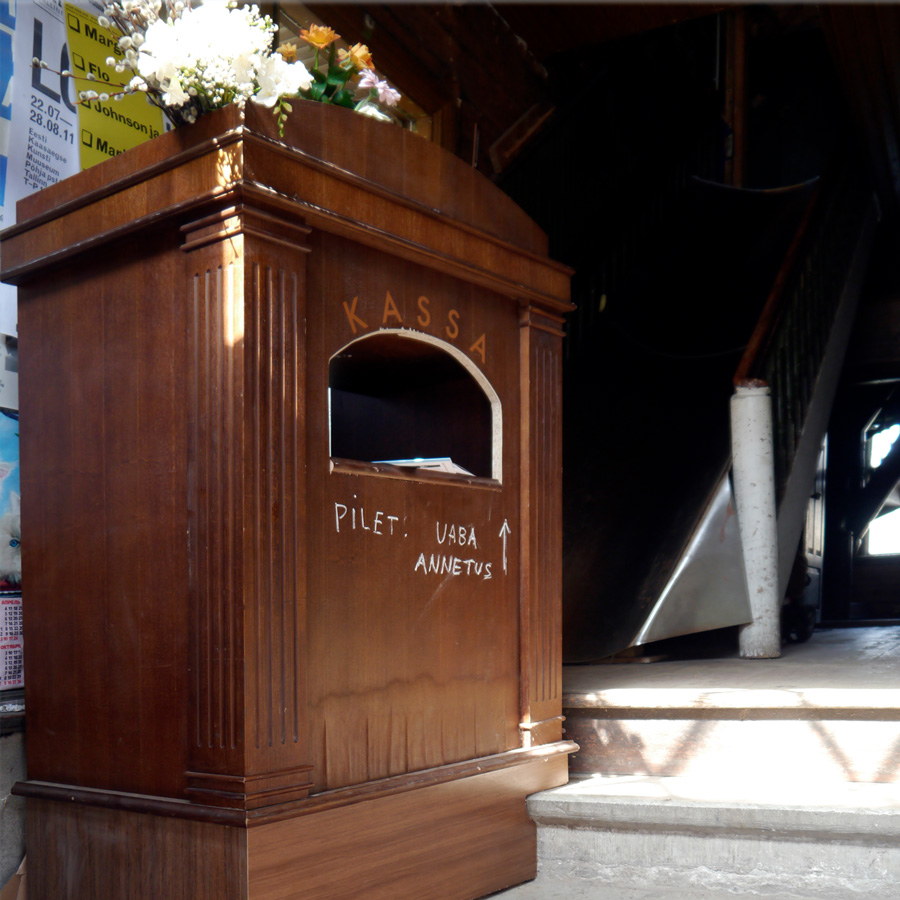 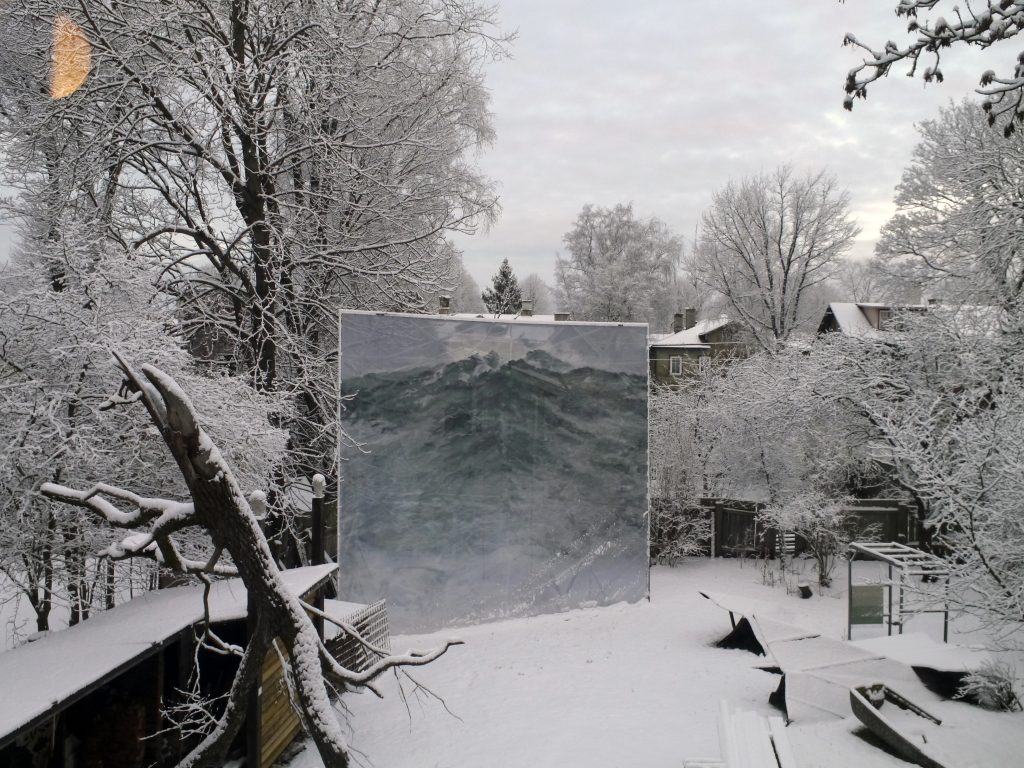 Landscape Painting is presented in Flo Kasearu’s House Museum courtyard; the size and placement of the painting employed to purify the view from the museum’s windows, also because the neighbours’ house did not stylistically fit in the atmosphere of the Pelgulinn district in Tallinn.

Fears of the House Owner 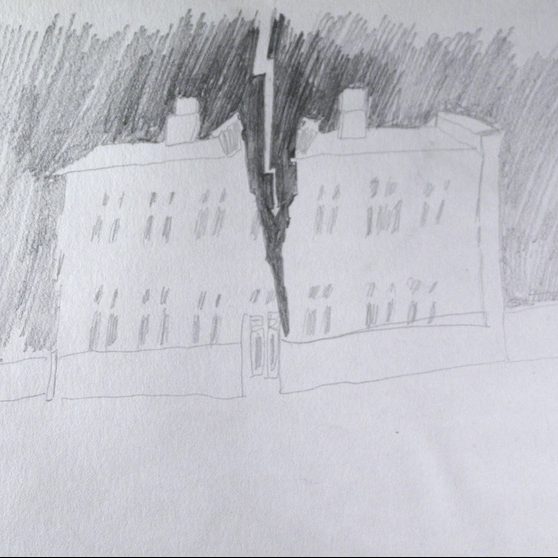 What are the actual feelings of he young house owner, tortured of insomnia by the concerns and responsibilities she has towards her ward? What dreadful incidents may happen with the defenceless house and its hostess? The series of small graphite drawings shows 16 different possible future scenarios for a house. 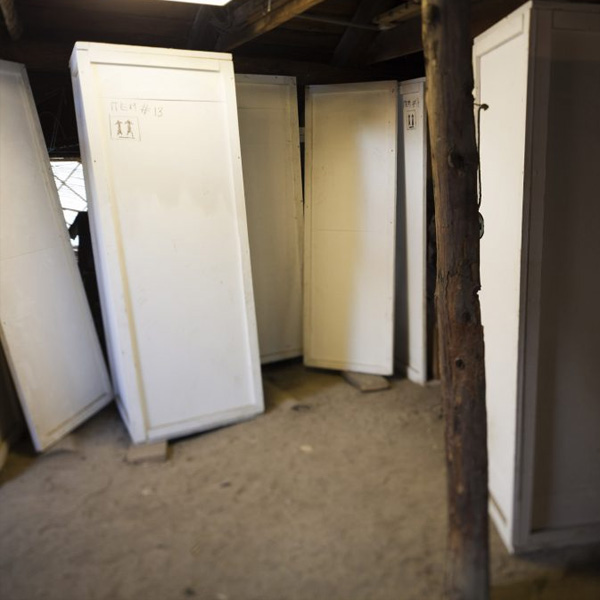 Flo Kasearu’s House Museum’s attic is an archive and depository. The archive consists of media reflections on the artist’s former career. In the depository a set of well known pieces of Flo Kasearu’s works are exhibited – works that weren’t shown in the museum’s permanent exhibition. 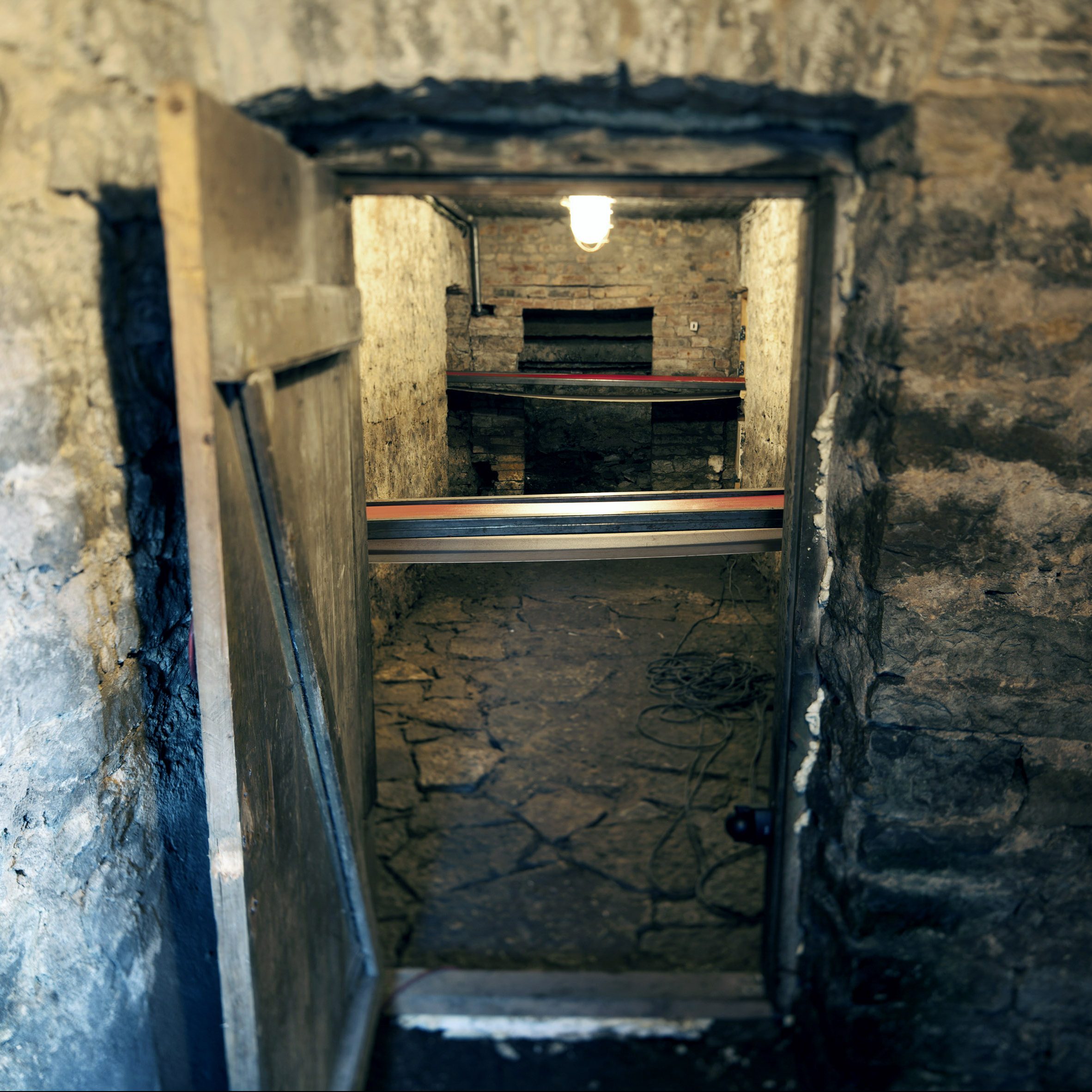 In the basement of Flo Kasearu House Museum a conveyer of creative industry is set up for art production. This is where art is being produced round the clock. Every day thousands of beautiful items are crafted on its belts.

We Are On the Way 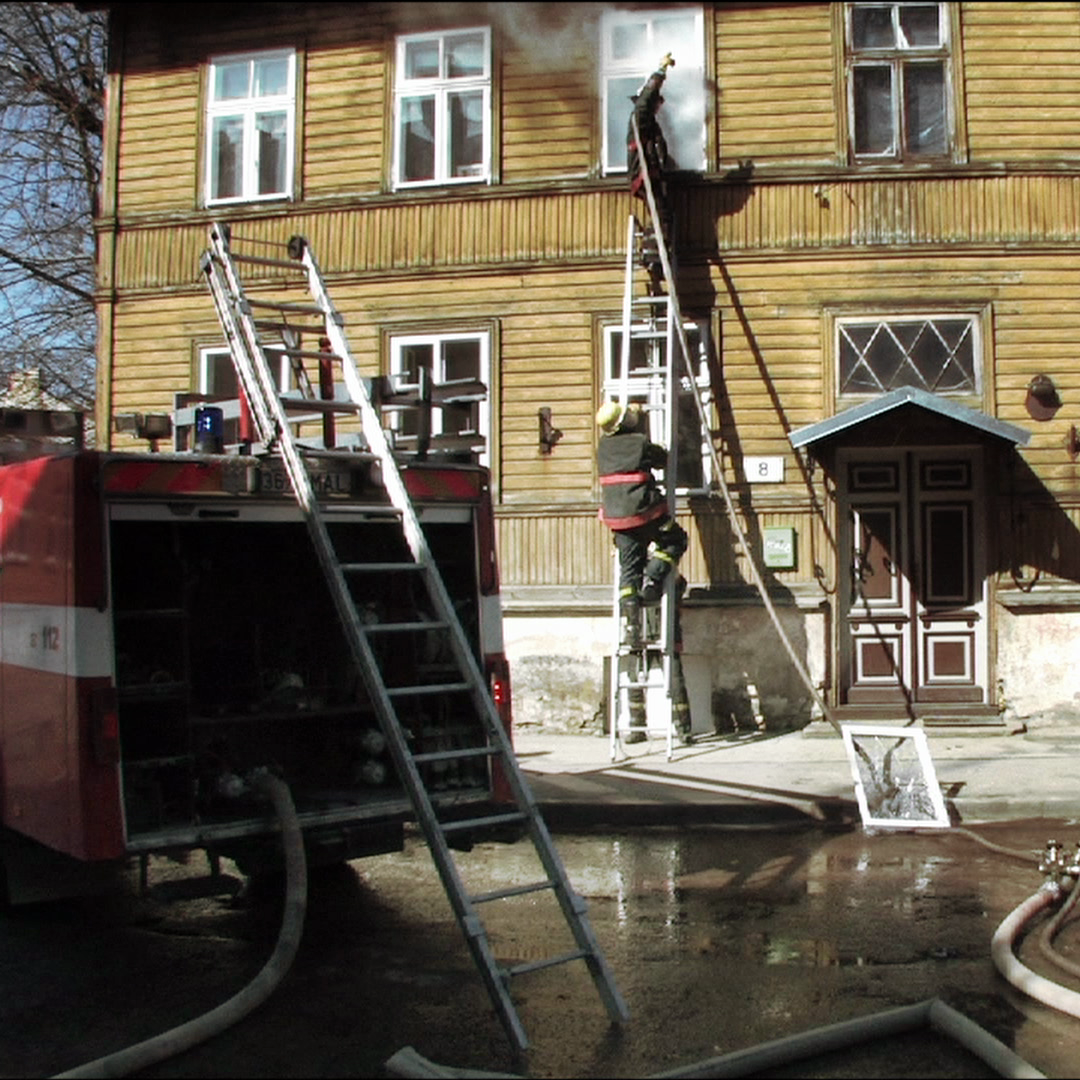 We are on the way is a video installation where a fire truck potentially filled with water is seen riding in slow motion, at five to ten kilometers an hour along the streets in a Tallinn residential neighborhood. The fire truck, which should act quickly to arrive at the scene, has lost its possibility to help, meandering eternally along the streets. The possibility of the fire truck and the firefighters arriving and rescuing anyone has become unreal, placing the rescue and possibility of the rescue in generally in doubt. 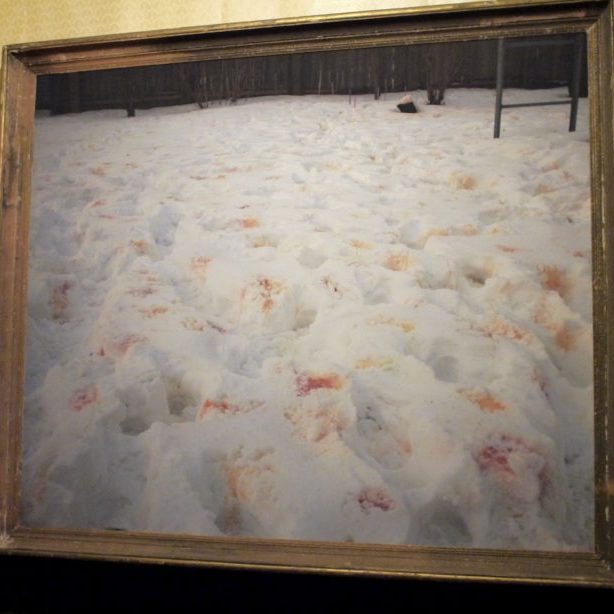 An installation of a winter garden as seen through the eyes of a detective who is investigating a case of archaic territory markings, seen all over the courtyard’s fresh snow.

From the hallway of the House Museum, a display can be found that is used creatively as an information board, Hall of Fame and pillory. Paper dolls drawn from life are helping the visitor to identify the rent debtors. 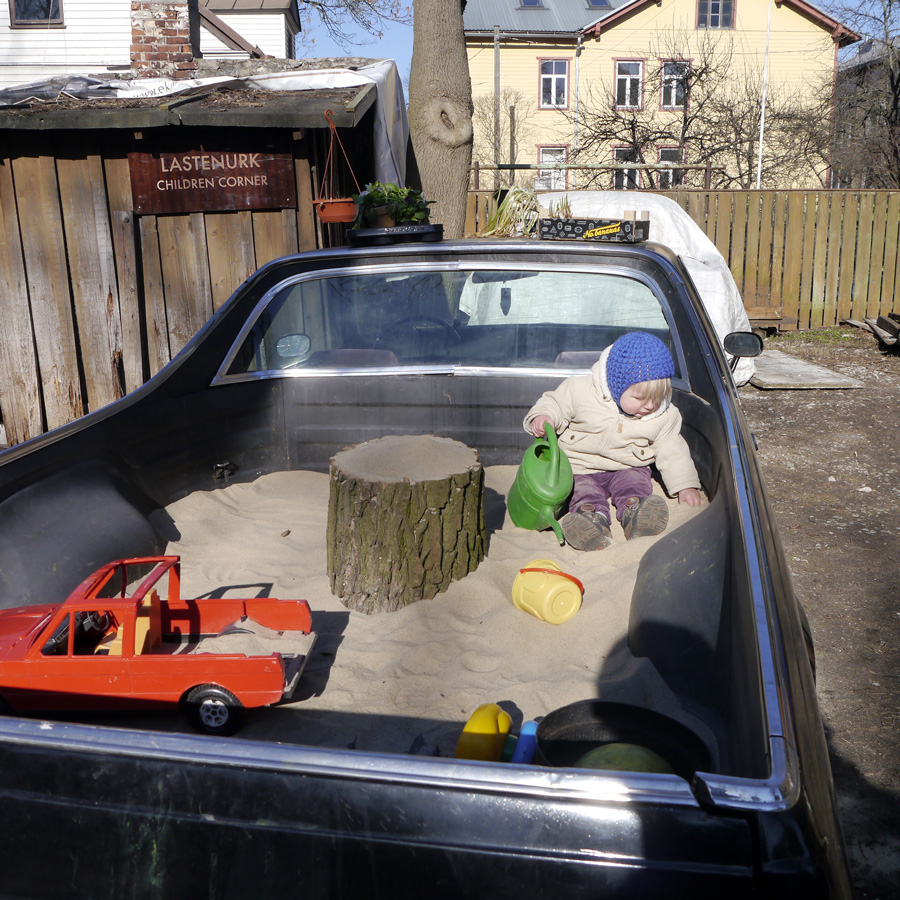 Play corners of the courtyard are created especially with our youngest guests in mind. Children can play educing and creative games while their parents are enjoying the art. Our safe playground shares the creative philosophies of the museum and is open for our small and also bigger visitors. Assembling a log-puzzle can be of great enjoyment for everybody! 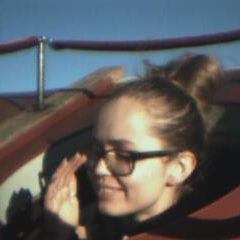 The peak of the permanent exhibition of FKM is an interactive urban installation, inviting visitors for a breath of fresh air and to calm their minds with a peaceful city view. The piece is interactive and by accepting the invitation of a meditative break from the fuss of life and the museum, the visitor automatically permits their musealisation. 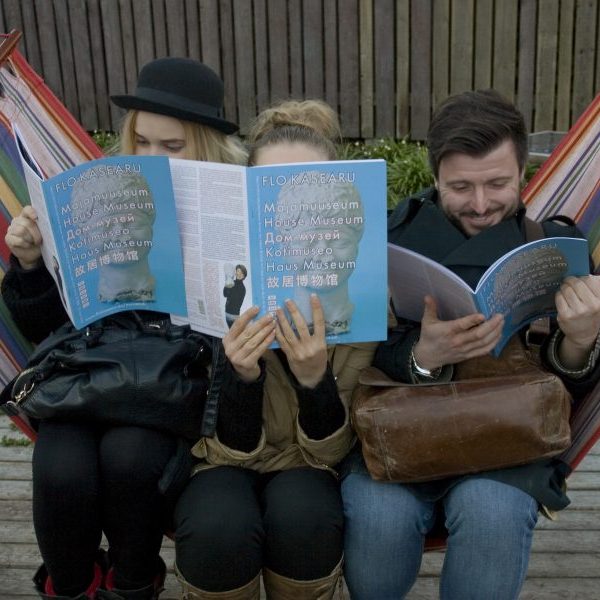 FKM has a museum’s guide in 5 languages.

Instead of the main stairs of the museum, an unique slide provides the visitor with a fast adrenaline rush, leaving from the museum. In conjunction with the architecture of the building and staircases through four levels, Ars longa vita brevis creates an adequate and physically perceptible model to show the harshness of reaching art compared to the ease of free departure.

Estonian Dream is a video-portrait of a girl of Estonian origin who went to America to fulfil her dreams and be with the one she loves. As it seems from the videos she uploads to YouTube (under the pseudonym Texasgirly), following one’s dream has a darker side to it. Living in her dream-life doesn’t relieve her longing for her native home, the Estonia of her dreams. 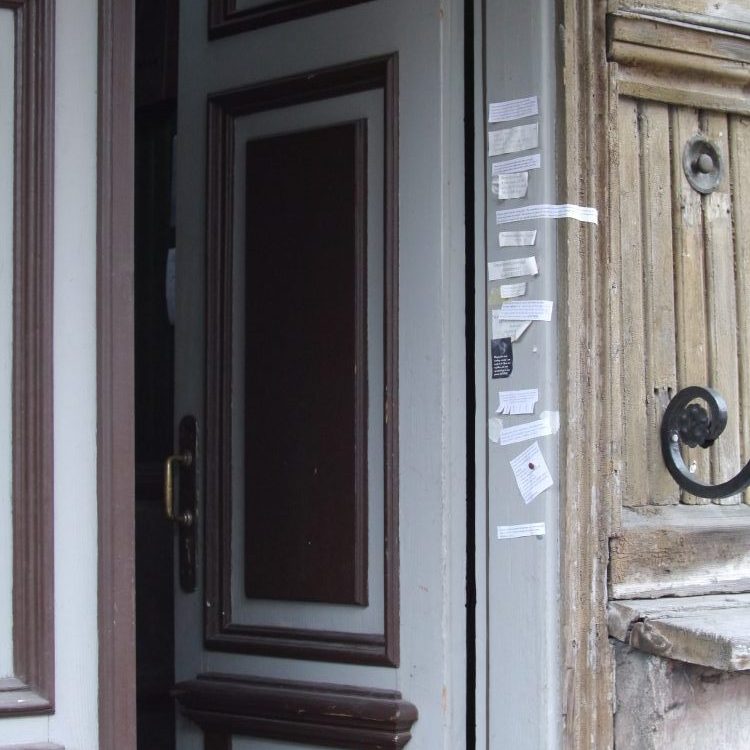 On the doorpost of the main entrance of the museum a modest collection of ads are presented, left there by people who have expressed their wish to live in FKM over the past years.

Horror Vacui (Fear of the Emptiness) 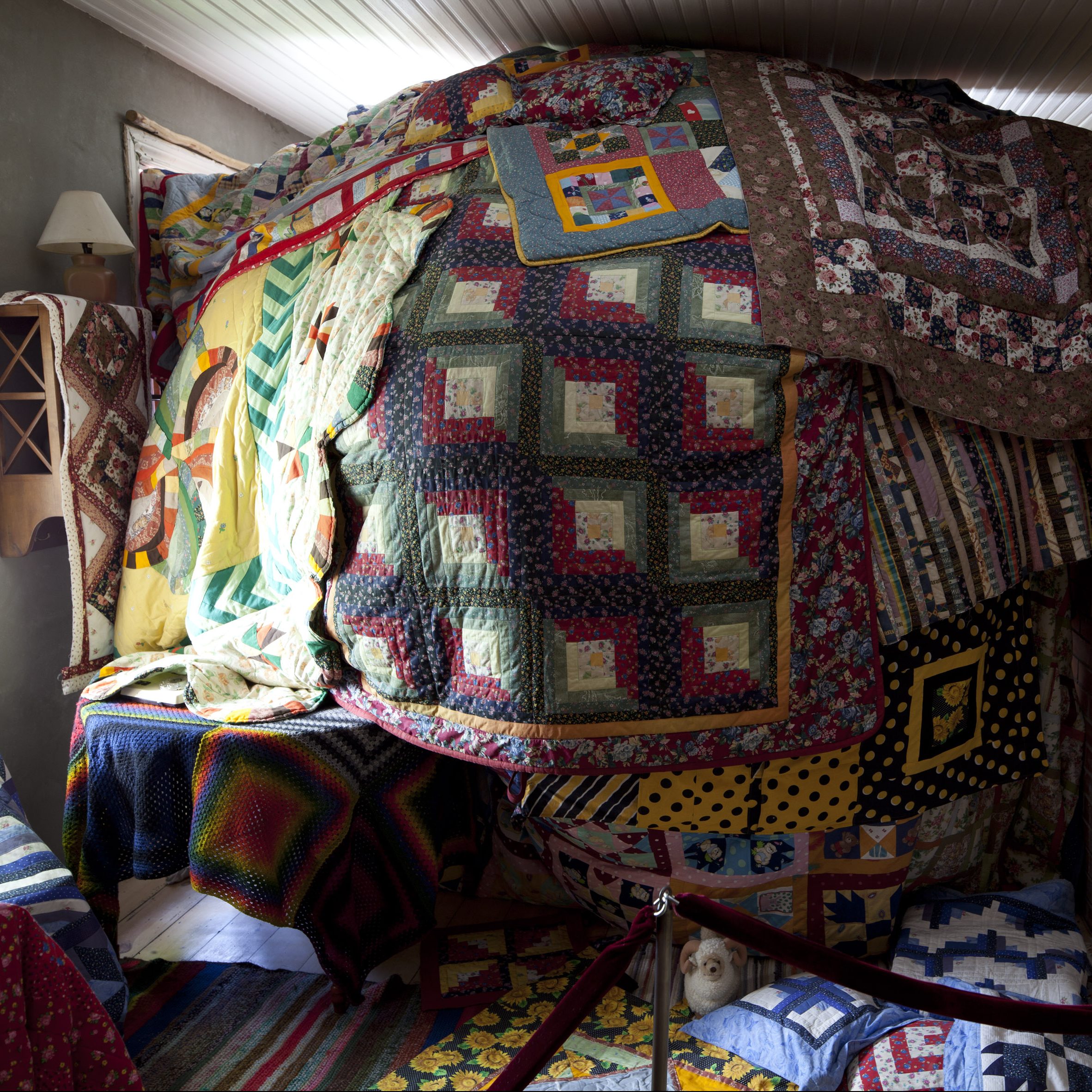 Emptiness is intimidating and hard to abide. How does one escape from emptyness in their own home? How does one fill the empty days, passing the time and creating intimate domestic environments? The installation in apartment no 8 attempts to answer those questions. 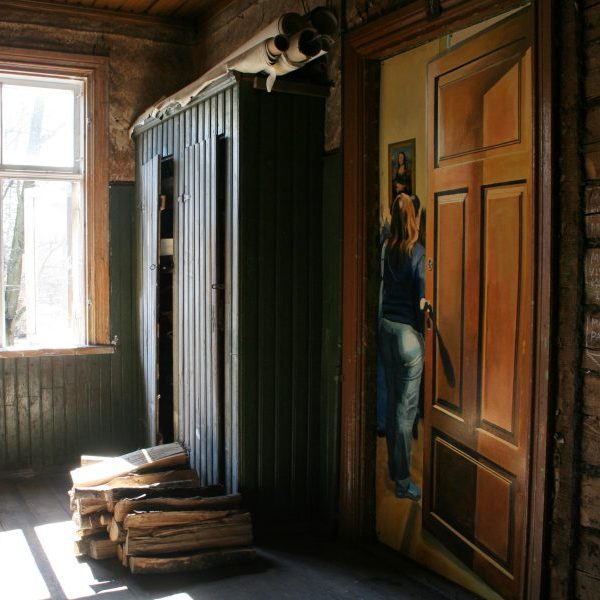 The most famous apartment, #7, is always crowded by people who want to see, even for a brief moment, the masterpiece they have heard so much of.